A performative installation in Mozilla Hubs, where Camilla Vatne Barrat-Due(NO), accordionist and performer, and Alexandra Cardenas(CO), composer, and live coder, join forces to create an oniric space where Norwegian and Colombian traditional folksongs can co-exist and generate unexpected dialogues.

Diverse loops of music and videos will immerse the audience in a world where Colombian and Norwegian folk music meet and interact. Deconstructed accordions will retrace vallenato melodies from a completely new narrative in a generative environment. The piece is in constant change and evolution. New performances add layers to an apparently infinite construction that starts from the image of an accordion lying on a Colombian beach shore. A shipwreck that accidentally brought a new musical instrument to Colombia’s coasts and started a new culture that shaped a whole country.

Alexandra Cárdenas
Composer and live coder, born in Bogota and living in Berlin.
Using open source software like SuperCollider and TidalCycles, her work is focused on the exploration of the musicality of code and the algorithmic behaviour of music through the practice of live coding. Having an intense activity as teacher and performer of live coding, Alexandra is among the pioneers of live coding in electroacoustic music and part of the forefront of the Algorave scene. She is part of the duo aALleEXx (with Alex McLean). Currently she lives in Berlin, Germany, and finished her masters in Sound Studies at the Berlin University of the Arts.

Camilla Vatne Barratt-Due
Camilla Vatne Barratt-due is a musician and composer playing the classical accordion. She was educated at the Royal Danish Academy of Music in Copenhagen and finished her MA in Sound Studies at the University of the art in Berlin. She plays the accordion in a wide range of constellations, exploring its inside. Currently finding ways to bring sound out of the old accordion-reeds, through playing dismantled accordions with external air, controlled by the computer. She is continuously composing electronic music for contemporary dance and theatre productions presented at venues such as London Royal Opera-House, Oslo international Theatre Festival,
Black Box theatre (No) October Dance (No), TAZ #10 (Be), Impulz-Tanz (Aut), Weld (Se) and Radial system (De). Since 2014 she is a member of the performance-art-duo “Felleskassen”, that has exhibited on venues such as Nikolaj Kunsthall (Dk), Arts Santa Monica(Spa), ANX (No) and Oslo Open, and was in 2015 artists in residence at the Eufonic festival for sound art in Spain. Since 2013 she has ben working with Alexandra Cardenas searching for a field, where they can combine the concept of patterns and codes with the accordion and voice. They have presented their music at festivals such as, Piksel (No), Bergen International Festival, and Transmediale. 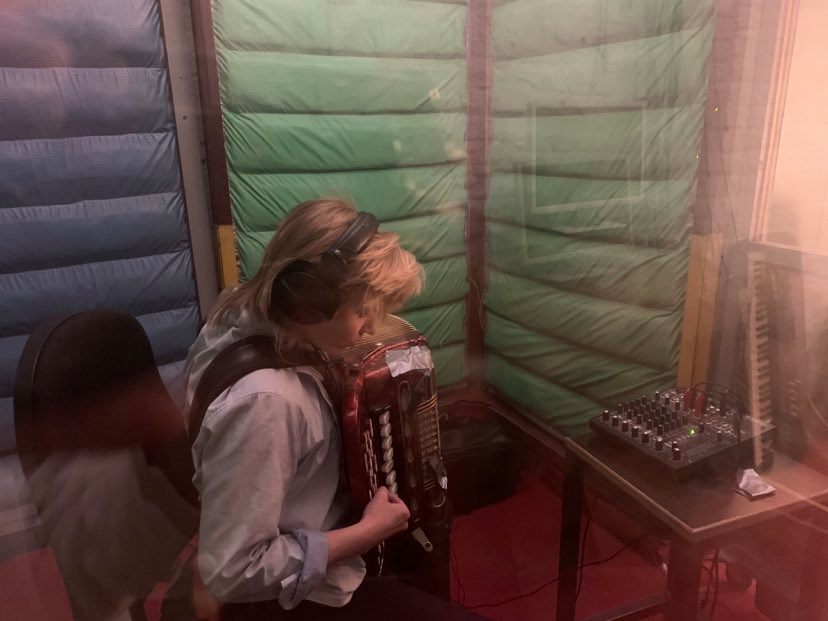